The Judas Trees bloom in April surrounding the Alhambra. With purple blossom glowing in the warm air of springtime in southern Spain, and the cool snows of the Sierra Nevada as a backdrop.

I think this collection of broken towers, palaces, dungeons and gardens is one of the most Romantic places to visit in Europe. Romantic in the 19th century sense of the word rather than the boy meets girl scenario.

Of course I’m neither the first nor the last tourist to visit the Alhambra. Back in 1829 a romantic traveller and writer by the name of Washington Irving arrived. Irving had achieved some celebrity status with stories such as Rip van Winkle and The Legend of Sleepy Hollow but he was suffering writers block.

Travelling in Spain and coming to Granada to research a history book, he described the place as:

“a most picturesque and beautiful city, situated in one of the loveliest landscapes that I have ever seen.”

He was granted access to the Alhambra by the archbishop of Granada and engaged a guide – Mateo Ximenes – to explore.

I love the thought of him camping out for months in the ruined palace, scribbling furiously in his notebooks and producing an evocative collection of sketches and stories entitled Tales of the Alhambra. The book is a mix of history and myth, description and memoir, although he admitted his writing would never do the setting justice.

“How unworthy is my scribbling of the place.”

His “discovery” and writing reintroduced the Alhambra to western consciousness. His notes and writing capture a moment in time that is forever lost to us. He described it thus:

“Perhaps there never was a monument more characteristic of an age and people than the Alhambra; a rugged fortress without, a voluptuous palace within; war frowning from its battlements; poetry breathing throughout the fairy architecture of its halls.”

Since then the Alhambra has also been a setting chosen by novelists such as Salman Rushdie in The Moor’s Last Sigh and Paul Coehlo in The Alchemist. More recently, G Willow Wilson returned to the reign of the last sultanate in the Iberian peninsula in The Bird King.

It was in the mid-14th century that the Moorish rulers of the Emirate of Granada in al-Andalus began to build “the red fortress” on the top of the Assabica hill. The place has suffered centuries of disrepair and some clumsy restoration work but it still represents utter romance, as well as outstanding an example of Islamic architecture.

The Alcazaba or citadel is the most prominent original feature and its stark red walls are a contrast to the royal complex, which is a wonder of honeycombed vaulting and carved arabesques, geometrical patterns and painted tiles. I loved the exquisite miradors from which palace ladies looked down on the cool gardens.

The UNESCO World Heritage Site complex is a mixture of medieval Moorish castle and 16th century Spanish palaces, but it is nothing without its gardens. A poet once described the gardens of the Alhambra as almost competing with the celestial beauty of the moon and a walk through the Alhambra’s ‘paradise gardens’ is to be overwhelmed by the simplicity of perfect design.

I walked beneath Wisteria arbors scenting the  air and let my ears fill with the sound of streams of water trickling down the water stairway. Wide pools mirror archways and palm trees – it’s pure Andalusia.

That night in Granada I went to the Bodegas Castenada, where elderly gentlemen in fedoras and pale linen jackets gather for tapas and a glass of red wine. I ate salty manchego  and cheeses laced with cardamon or apricot with sweet creamy almonds.

On my last morning in Granada I climbed through the steep narrow streets of the Arab Quarter, with its elaborately cobbled patterns of smooth stones.  Up through back streets of quiet, shuttered houses.

From the plaza of the Mirador de San Nicolas I look out on the Alhambra and the old town. Punctuated by tall cypresses, the olive groves march in long lines up the hillsides towards the fortress on its rocky outcrop.

Moorish poets described the Alhambra as a “pearl set in emeralds” and from here I can see why.

Leave me in Granada in the middle of paradise where my soul wells with poetry;

Leave me until my time comes and I may intone a fitting song.

Yes, I want my memorial stone in this land.

Granada! Holy place of the glory of Spain,

Your mountains are the white tents of pavilions,

Your walls are the circle of a vase of flowers,

Your plan a Moorish shawl embroidered with colour,

Your towers are palm trees that imprison you. 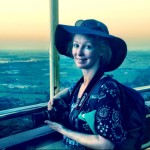 Hi, I'm Natasha von Geldern and I'm here to share travel inspiration based on books I've read and films I've seen. If you're a book nerd or a film geek, this is the blog for you!

7 books worth reading before you travel to Myanmar

A bright star at Keats House museum in London

Meet the Man from La Mancha in Toledo

Lord of the Rings film locations in New Zealand